Bitfarms does not offer financial services, nor direct investment opportunities to the general public. We are not associated in any way with any of these activities. We will never ask you to send money or open an account. Please do your research and avoid any interaction with such bad actors.

Bitfarms Announces Plan to More than Double Installed Power Capacity in Québec in 2021 and Increases Hashrate to 1.42 EH/s

To deliver our growth forecast goals for 2021, Bitfarms has recently made significant commitments to developing new infrastructure in Québec. These developments include our previously announced Cowansville site renovation which will involve the increase in the installed power at the site from 4 MW to 17 MW. The expanded facility will be ready in July 2021. The Cowansville expansion will be equipped with the previously announced new miner deliveries:

With the completion of the Cowansville expansion, Bitfarms will have successfully developed 82 MW out of our 160 MW of contractual capacity with Hydro Quebec.

In addition, Bitfarms recently ordered materials, transformers, and electrical equipment to develop a further 66 MW of power capacity in Québec during the remainder of 2021 for a new mining site in Sherbrooke. Combined with the Cowansville expansion, a total of 79 MW of new mining infrastructure powered by green Québec hydro power will be developed and will become operational in 2021. Cumulatively Bitfarms is expecting to have 148 MW of installed hydro power mining infrastructure in Quebec by the end of 2021.

The new infrastructure will be able to support approximately 21,000 new generation miners capable of adding approximately 2.1 EH/s of new production. Many of the 48,000 WhatsMiner mining rigs previously announced for delivery starting in January 2022 or perhaps sooner, are destined for the existing and new mining facilities located in Sherbrooke, Quebec.

With scheduled deliveries and miners being rehabilitated, Bitfarms is on track to achieving over 1.7 EH/s during the summer of 2021. With robust new infrastructure in Québec to be available in the foreseeable future, we can now turn our sights on acquiring new miners to be installed as construction is completed at the various facilities.

Having demonstrated rapid growth and stellar operations, Bitfarms became the first Bitcoin mining company to complete its long form prospectus with the Ontario Securities Commission and started trading on the TSX-V in July 2019. On February 24, 2021 Bitfarms was honoured to be announced as a Rising Star by the TSX-V.

Bitfarms has a diversified production platform with five industrial scale facilities located in Québec. Each facility is 100% powered with environmentally friendly hydro power and secured with long-term power contracts. Bitfarms is currently the only publicly traded pure-play mining company audited by a Big Four audit firm.

To learn more about Bitfarms’ events, developments, and online communities:

MW: A Megawatt is used to measure the output of a power plant or the amount of electricity required by facility or an entire city. One megawatt (MW) = 1,000 kilowatts = 1,000,000 watts.

Trading in the securities of the Company should be considered highly speculative. No stock exchange, securities commission or other regulatory authority has approved or disapproved the information contained herein. Neither the TSX Venture Exchange nor its Regulation Services Provider (as that term is defined in the policies of the TSX Venture Exchange) accepts responsibility for the adequacy or accuracy of this release.

This news release contains certain “forward-looking information” within the meaning of applicable securities laws that are based on expectations, estimates and projections as at the date of this news release. The information in this release about future plans and objectives of the Company is forward-looking information. Other forward-looking information includes, but is not limited to, information concerning: the intentions, plans and future actions of the Company, as well as Bitfarms’ ability to successfully mine digital currency, revenue increasing as currently anticipated, the ability to profitably liquidate current and future digital currency inventory, volatility of network difficulty and digital currency prices and the resulting significant negative impact on the Company’s operations, the construction and operation of expanded blockchain infrastructure as currently planned, and the regulatory environment of cryptocurrency in the applicable jurisdictions.

Any statements that involve discussions with respect to predictions, expectations, beliefs, plans, projections, objectives, assumptions, future events or performance (often but not always using phrases such as “expects”, or “does not expect”, “is expected”, “anticipates” or “does not anticipate”, “plans”, “budget”, “scheduled”, “forecasts”, “estimates”, “believes” or “intends” or variations of such words and phrases or stating that certain actions, events or results “may” or “could”, “would”, “might” or “will” be taken to occur or be achieved) are not statements of historical fact and may be forward-looking information and are intended to identify forward-looking information.

This forward-looking information is based on reasonable assumptions and estimates of management of the Company at the time it was made, and involves known and unknown risks, uncertainties and other factors which may cause the actual results, performance or achievements of the Company to be materially different from any future results, performance or achievements expressed or implied by such forward-looking information. Such factors include, among others, risks relating to: the global economic climate; dilution; the Company’s limited operating history; future capital needs and uncertainty of additional financing; the competitive nature of the industry; currency exchange risks; the need for the Company to manage its planned growth and expansion; the effects of product development and need for continued technology change; protection of proprietary rights; the effect of government regulation and compliance on the Company and the industry; network security risks; the ability of the Company to maintain properly working systems; reliance on key personnel; global economic and financial market deterioration impeding access to capital or increasing the cost of capital; and volatile securities markets impacting security pricing unrelated to operating performance. In addition, particular factors that could impact future results of the business of Bitfarms include, but are not limited to: the construction and operation of blockchain infrastructure may not occur as currently planned, or at all; expansion may not materialize as currently anticipated, or at all; the digital currency market; the ability to successfully mine digital currency; revenue may not increase as currently anticipated, or at all; it may not be possible to profitably liquidate the current digital currency inventory, or at all; a decline in digital currency prices may have a significant negative impact on operations; an increase in network difficulty may have a significant negative impact on operations; the volatility of digital currency prices; the anticipated growth and sustainability of hydroelectricity for the purposes of cryptocurrency mining in the applicable jurisdictions, the ability to complete current and future financings, any regulations or laws that will prevent Bitfarms from operating its business; historical prices of digital currencies and the ability to mine digital currencies that will be consistent with historical prices; an inability to predict and counteract the effects of COVID-19 on the business of the Company, including but not limited to the effects of COVID-19 on the price of digital currencies, capital market conditions, restriction on labour and international travel and supply chains; and, the adoption or expansion of any regulation or law that will prevent Bitfarms from operating its business, or make it more costly to do so. For further information concerning these and other risks and uncertainties, refer to the Company’s filings on www.SEDAR.com including the annual information form for the year ended December 31, 2020, filed on April 7, 2021. The Company has also assumed that no significant events occur outside of Bitfarms’ normal course of business. Although the Company has attempted to identify important factors that could cause actual results to differ materially from those expressed in forward-looking statements, there may be other factors that cause results not to be as anticipated, estimated or intended. There can be no assurance that such statements will prove to be accurate as actual results and future events could differ materially from those anticipated in such statements. Accordingly, readers should not place undue reliance on forward-looking information. The Company undertakes no obligation to revise or update any forward-looking information other than as required by law.

A graph accompanying this announcement is available at https://www.globenewswire.com/NewsRoom/AttachmentNg/002afc6c-5697-4a90-88bc-65ac32a5b147 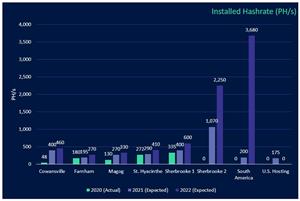 Sign up today and receive company updates straight to your inbox.

We use cookies to offer you a better browsing experience, including personalized advertising. By continuing to use the site you agree to their use.